Off Vicksburg, the U.S.S. Cincinnati is sunk with heavy losses as six men win Medals of Honor 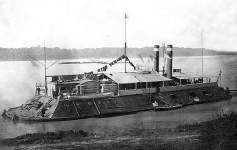 05/27/1863
The sternwheel gunboat U.S.S. Cincinnati had been sunk at Fort Pillow the previous year, raised, and repaired.  Struck with multiple shells during a bombardment of Vicksburg, she once again sank with the loss of forty men amongst her 250 crew.  Six sailors were later awarded the Congressional Medal of Honor for their actions during the engagement.  The Cincinnati was once again raised and served till war's end. (By John Osborne)
Source Citation
Chronicles of the Great Rebellion Against the United States of America ... (Philadelphia, A. Winch, 1867), 56.
How to Cite This Page: "Off Vicksburg, the U.S.S. Cincinnati is sunk with heavy losses as six men win Medals of Honor," House Divided: The Civil War Research Engine at Dickinson College, https://hd.housedivided.dickinson.edu/index.php/node/39729.