At the U.S. Capitol, the House of Representatives passes the Civil Rights Bill of 1866 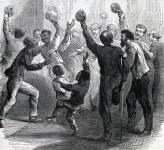 03/13/1866
With the Freedmen's Bureau Bill passed and President Johnson expected to sign it, the Senate had continued with the work of Reconstruction with the Civil Rights Bill, passing Lyman Trumbull's legislation by a vote of 33-12 on February 2, 1866 after a heated debate. The bill cleared the House five weeks later by a tally of 109 to 38. President Johnson by then had unexpectedly vetoed the Freemen's Bureau Bill and followed up with the veto of the Civil Rights Bill on March 27, 1866.  (By John Osborne)
Source Citation
William A. Barnes, History of the Thirty-Ninth Congress of the United States (New York: Harper and Brothers, 1868), 219.
How to Cite This Page: "At the U.S. Capitol, the House of Representatives passes the Civil Rights Bill of 1866," House Divided: The Civil War Research Engine at Dickinson College, https://hd.housedivided.dickinson.edu/index.php/node/45071.