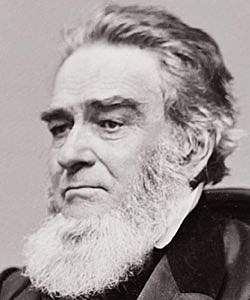 Edward Bates served as attorney general for most of Abraham Lincoln’s presidency. Born into a Virginia slave-holding family on September 4, 1793, Bates moved to St. Louis following a year’s militia service during the War of 1812. After admission to the bar in 1816, he enjoyed early political success, serving as Missouri’s first attorney general, a state legislator, and a single-term member of the House of Representatives. For more than two decades after his failed 1828 bid for re-election, Bates served in the state legislature as a member of the minority Whig party while concentrating on his law practice and his growing family—he and his wife Julia had seventeen children, nine of whom survived to adulthood. The passage of the Kansas-Nebraska Act in 1854 drew Bates back into national politics. Too conservative to embrace the outspoken anti-slavery sentiments of many in the new Republican Party, Bates stubbornly clung to his Whig affiliation and flirted briefly with the Know Nothings, thereby alienating Missouri’s large German population. In 1860, he made his peace with the Republicans and emerged at the party convention as a conservative alternative to both William Seward and Salmon Chase. The delegates instead turned to Abraham Lincoln, who tapped Bates as his attorney general. Although overshadowed by less conservative colleagues such as Seward, Chase, and Edwin Stanton, Bates played the leading role in framing and defending Lincoln’s wartime suspension of the writ of habeas corpus and the Union blockade of Southern ports. Bates’ personal life mirrored the divisive nature of Civil War America: one son served the Confederacy, a second the Union, and a third spent most of the war at West Point. Although Bates had emancipated and paid for his last slave’s passage to Liberia in 1851, he was generally unsympathetic to the cause of African American freedom. He nonetheless wrote a critical defense of free blacks’ right to citizenship on the eve of the issuance of the Emancipation Proclamation. Increasingly out of step with the Lincoln’ aggressive war aims and suffering the after effects of a stroke, Bates resigned his cabinet post in December 1864. Bates kept a daily journal, however, and his diary entries for the wartime period are especially valuable as a resource on the Lincoln Administration. True to his conservative beliefs, he opposed a postwar Missouri constitution disenfranchising former Confederates and supported President Andrew Johnson’s moderate Reconstruction policies. Bates died on March 25, 1869 in St. Louis. (By Rick Beard)
Life Span
09/04/1793 to 03/25/1869
Dickinson Connection
Bates challenged the legal opinions of Chief Justice of the United States, Roger Brooke Taney (Class of 1795)
How to Cite This Page: "Bates, Edward," House Divided: The Civil War Research Engine at Dickinson College, https://hd.housedivided.dickinson.edu/index.php/node/5051.