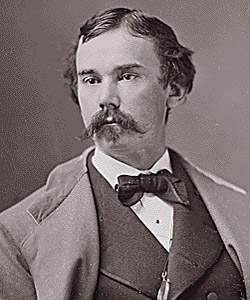 John Milton Hay served Abraham Lincoln in the White House through four years of war. He was the third son of physician and Whig editor Charles Hay and his wife Helen Leonard Hay in Salem, Indiana. He grew up in Warsaw, Illinois, attended nearby Pittsfield Academy and went on to Brown University. He returned to Illinois, however, and somewhat unhappily entered his uncle's law firm at Springfield in 1858. Abraham Lincoln’s own law office was next door and when Lincoln became president Hay joined him as assistant to his secretary, John Nicolay. Young, handsome, with brown hair and arresting hazel eyes he brought a cheerful and cosmopolitan wit to his task and became a firm favorite of the beleaguered president. He was not the favorite of all, however; his elders often saw him as arrogant and self-important and he clashed with Mrs. Lincoln, who he came to call the "hellcat." He was at Lincoln's deathbed in 1865. Hay served as diplomat in Europe for the next five years. On his return he continued to write poetry and fiction and also began to put together, with Nicolay, their famous ten volume life of Abraham Lincoln, published in 1890. He married Cleveland heiress Clara Stone in 1874 and they had four children. In 1897, he was named Ambassador to Great Britain and in 1898 became the 37th U.S. Secretary of State. He negotiated the Paris Treaty to end the war with Spain, which he famously termed “that splendid little war." He died at his summer home in New Hampshire on July 1, 1905 and is buried in Cleveland's Lake View Cemetery. (By John Osborne)
Life Span
10/08/1838 to 07/01/1905
How to Cite This Page: "Hay, John Milton," House Divided: The Civil War Research Engine at Dickinson College, https://hd.housedivided.dickinson.edu/index.php/node/5859.