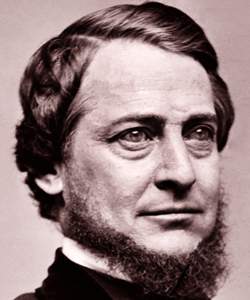 Clement Vallandigham, a lawyer and politician, was a leading “Copperhead” critic of the Lincoln administration and its prosecution of the Civil War. Born in New Lisbon, Ohio, on July 29, 1820, he attended Jefferson College in Pennsylvania before electing to study law. In 1842 he established his legal practice in Dayton, Ohio. He served one term in the Ohio legislature in the 1840s, won election to the 34th Congress in 1858 and served until 1863. Leader of the Peace Democrats on Capitol Hill, Vallandigham was a strong proponent of state rights and an outspoken opponent of Lincoln’s emancipation policies. Republicans helped engineer his defeat in November 1862 by redrawing the congressional district lines in Ohio. Vallandigham then returned to Ohio to run for governor, where an inflammatory speech in the spring of 1863 led to his arrest and conviction for treason by a military commission. President Lincoln commuted his sentence, exiling him instead to the Confederacy. An unwelcome guest in the South, he made his way to Canada. Vallandigham then reportedly became involved with an ambitious plot to create a Northwestern Confederacy, but it went nowhere. Frustrated, he returned to Ohio in June 1864 and attended the Democratic National Convention in August, though Lincoln chose to ignore his presence. After the war, Vallandigham resumed his law practice and died in 1871 from a accidental self-inflicted gunshot wound when demonstrating his upcoming defense of an accused murderer. (By Rick Beard)
Life Span
07/29/1820 to 06/17/1871
How to Cite This Page: "Vallandigham, Clement Laird," House Divided: The Civil War Research Engine at Dickinson College, https://hd.housedivided.dickinson.edu/index.php/node/6760.