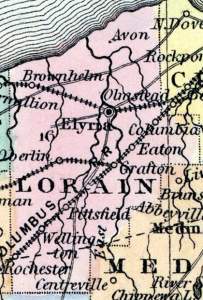 Oberlin is now a pleasant and thriving village, with a population of over 2000 souls, with stores, mechanics’ shops, &c., suited to the conditions of such a place. The sale of ardent spirits has never been permitted within its limits... The Presbyterian Church edifice is one of the largest in the state. Near it, upon a green of about 12 acres, stands the principal edifice of the college, named Tappan Hall, in honor of Arthur Tappan, Esq., of New York, an early and liberal benefactor of the institution. (Gazetteer of the United States of America, 1854)
How to Cite This Page: "Oberlin, OH," House Divided: The Civil War Research Engine at Dickinson College, https://hd.housedivided.dickinson.edu/index.php/node/9167.