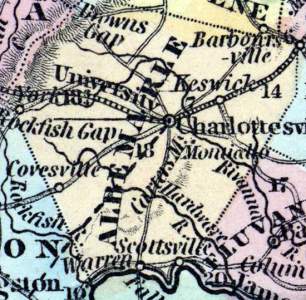 Charlottesville, the county seat, is 121 miles from Washington City, and 85 northwesterly from Richmond. It is beautifully situated in a fertile and well-watered valley, on the right bank of the Rivanna River. It contains many mercantile and mechanical establishments, and has greatly improved within the last few years. The religious societies are Episcopal, Presbyterian, Baptist, and Methodist. The population is not far from 2000: much of the society of the town and county is highly refined. (Historical Collections, 1852)