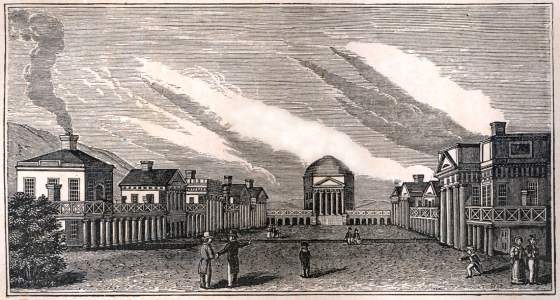 The UNIVERSITY OF VIRGINIA is one mile west of Charlottesville, and although of a deservedly high reputation, it is an institution of recent origin... It has a fine collection of buildings, consisting of four parallel ranges about 600 feet in length, and 200 feet apart, suited to the accommodation of 9 professorships, and upwards of 200 students; which, together with the real estate, cost over $300,000. It possesses valuable libraries, amounting to 16,000 vols., and is amply provided with philosophical and chemical apparatus, together with a fine cabinet of minerals and fossils, and an anatomical and miscellaneous museum. The observatory, a short distance from the university, is furnished with the requisite astronomical instruments. (Historical Collections, 1852)
How to Cite This Page: "University of Virginia, Charlottesville, VA," House Divided: The Civil War Research Engine at Dickinson College, https://hd.housedivided.dickinson.edu/node/20077.