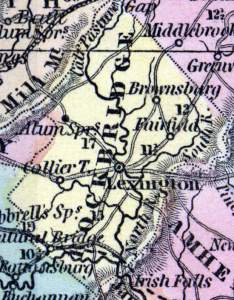 Lexington, the county-seat,... is beautifully situated on the west bank of North River, one of the main branches of the James... It is now quite compact, many of the buildings are of brick, and some of the private mansions – among which is that of the governor of Virginia, James M’Dowell, Esq. – are beautifully situated... Lexington contains 13 mercantile stores, 2 newspaper printing offices, Washington College, the Virginia Military Institute, a fine classical under the charge of Mr. Jacob Fuller, Ann Smith academy, which is a female institution, 1 Presbyterian, 1 Episcopalian, 1 Baptist, and 1 Methodist church, and about 1,200 inhabitants. (Historical Collections, 1852)
How to Cite This Page: "Lexington, VA," House Divided: The Civil War Research Engine at Dickinson College, https://hd.housedivided.dickinson.edu/node/15976.