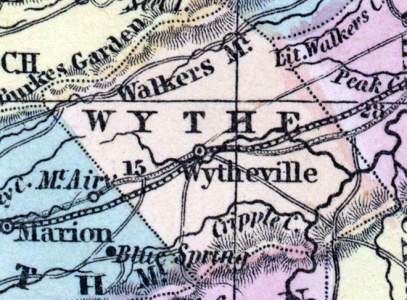 Wytheville, the county-seat, is on the main turnpike from Harper's Ferry to Knoxville, Tenn.,... it bore the name of Evansham, until changed to its present one in 1838. It contains 8 mercantile stores, 2 newspaper printing-offices, 1 Presbyterian, 1 Protestant Methodist, 1 German Lutheran, and 1 Catholic church, and about 700 inhabitants. The village is neat, well built, and flourishing. (Historical Collections, 1852)
How to Cite This Page: "Wytheville, VA," House Divided: The Civil War Research Engine at Dickinson College, https://hd.housedivided.dickinson.edu/node/16533.