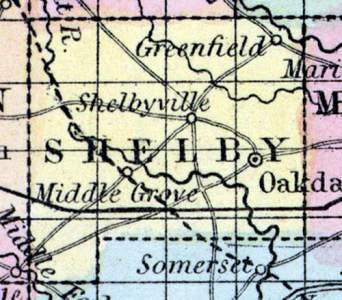 SHELBY, a county in the E. N. E. central part of Missouri, contains about 500 square miles. It is drained by the South Fabius, Salt, and North rivers, affluents of the Mississippi river. The surface is undulating, and the soil in general is fertile. Rather more than half of the county is occupied by prairies, which are based on limestone, and usually contain no swamp or stagnant water. The deficiency of timber is partly compensated by the abundance of stone coal, which is found here. Indian corn, wheat, and oats, are the staples. In 1850 this county produced 278,435 bushels of corn; 22,477 of wheat; 33,718 of oats, and 67,655 pounds of butter. It contained 5 churches, and 1051 pupils attending public schools. Capital, Shelbyville. Population, 4253; of whom 3755 were free, and 498, slaves. (Baldwin & Thomas, A New and Complete Gazetteer of the United States ...1854)