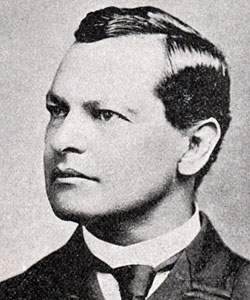 Preston Taylor was born a slave and progressed from Civil War drummer-boy to become a wealthy and respected entrepreneur and clergyman. He was born in Shreveport, Louisiana to Zed and Betty Taylor but the family was moved to Lexington, Kentucky where he grew up. With the Union in control of Kentucky in 1864, he enlisted at age fifteen in the 116th U.S. Infantry and served till the end of the war as a drummer, taking part in the siege of Petersburg and witnessing Lee's surrender. Following his discharge, he trained as a stone cutter and then worked as a railway porter in Kentucky for several years. He had also qualified as a pastor of the Church of the Disciples and left the railways to build a sterling reputation over fifteen years in the church at Mount Sterling, Kentucky. He became an important national figure in his denomination and helped found the Christian Bible College at New Castle, Kentucky. He remained as a trustee and financial agent for the College until late in his life. While at Mount Sterling he had built a successful labor contracting business, providing workers for the completion of expanding railroad lines in Kentucky. He moved on to a church in Nashville, Tennessee, where he became an influential community leader and opened a very well respected funeral director's business. He was married twice, first to Georgia Gordon and then to Ida Mallary. He was also an enthusiastic mason and was several times a State Grandmaster. He died in Nashville in 1931. (By John Osborne)
Life Span
11/07/1849 to 11/07/1931
How to Cite This Page: "Taylor, Preston," House Divided: The Civil War Research Engine at Dickinson College, https://hd.housedivided.dickinson.edu/node/27366.