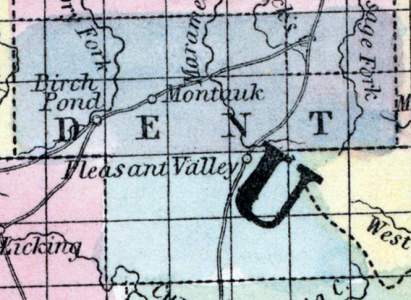 Formed in 1851 from portions of Crawford and Shannon counties.

DENT, a new county in the S. E. central part of Missouri. It is drained by the sources of the Maramec river, and by small affluents of the Current river. The surface is diversified by hills and valleys. The soil in some parts is fertile. The county is not included in the census of 1850, having been recently formed out of the N. part of Shannon county. Named in honor of Frederick Dent, an early and highly respected citizen of Missouri.  (Baldwin & Thomas, A New and Complete Gazetteer of the United States ... 1854)