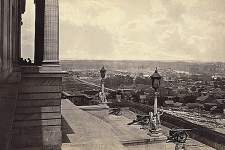 11/18/1859
Allen A. Hall, a reporter for the Nashville Daily News, killed George T. Poindexter, the editor of the Nashville Union and American with a shotgun blast. Following the Harpers Ferry Raid, the papers had exchanged a furious series of editorials.  Hall had called Poindexter a "Black Republican" angering Poindexter to the point that Hall, fearing for his safety when his antagonist approached the News offices, shot him down on the street.  (By John Osborne)
Source Citation
"An American Verdict," The Law Times, December 10, 1859, p. 139.
How to Cite This Page: "Newspaper feud in Nashville over Harpers Ferry results in murder on the street," House Divided: The Civil War Research Engine at Dickinson College, https://hd.housedivided.dickinson.edu/node/29929.