All defendants in the Columbus Jones kidnapping case acquitted in Massachusetts 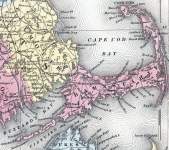 11/18/1859
A Barnstable County jury found Gorman Cowell, captain of the brig Roleson, his first mate, John Orlando, and the brig's owner not guilty on charges of kidnapping.  The case had resulted from the returning of the stowaway fugitive slave Columbus Jones to slavery from Hyannis, Massachusetts the previous May.  The argument for the verdict was largely based upon the doubtful jurisdiction of the county over events that happened off-shore. (By John Osborne)
How to Cite This Page: "All defendants in the Columbus Jones kidnapping case acquitted in Massachusetts," House Divided: The Civil War Research Engine at Dickinson College, https://hd.housedivided.dickinson.edu/node/29930.