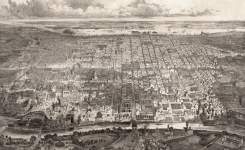 03/27/1860
Moses Horner, a fugitive slave from Virginia, had been captured near Harrisburg and taken to Philadelphia. There, a group of black men tried to rescue him on Chestnut Street as he was being moved by coach.  Police beat off the attempt and arrested several of the attackers.  Horner was returned to Virginia in April and five black Philadelphians were convicted in June 1860 of affray and spent thirty days in prison. (By John Osborne)
Source Citation
Francis Vincent, Vincent's Semi-Annual United States Register.... 1st of January and 1st of July, 1860 (Philadelphia: Francis Vincent, 1860), 216.
How to Cite This Page: "Failed rescue in Philadelphia of a Virginia fugitive being returned to slavery ," House Divided: The Civil War Research Engine at Dickinson College, https://hd.housedivided.dickinson.edu/node/31415.