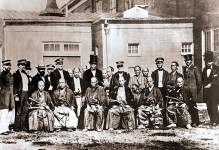 06/08/1860
The first diplomatic mission to the United States arrived in Washington, D.C. on May 14, 1860.  After three weeks in the capital, the group traveled to Baltimore and then on to Philadelphia where they were guests of the city.  They went on to New York City on June 16, 1860. The embassy departed for home from New York aboard the U.S.S. Niagara on June 30, 1860.  (By John Osborne)
Source Citation
Chitoshi Yanaga, "The First Japanese Embassy to the United States," in Ellis S. Krauss and Benjamin Nyblade (eds.), Japan and North America: First Contacts to the Pacific War (New York: Routledge, 2004), 45-46.
How to Cite This Page: "First Japanese diplomatic mission to the United States visits Baltimore and Philadelphia," House Divided: The Civil War Research Engine at Dickinson College, https://hd.housedivided.dickinson.edu/node/31426.