In Charleston, South Carolina, the Democratic National Convention votes to adjourn and meet in Baltimore 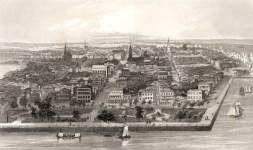 05/03/1860
The Democratic National Convention meeting in Charleston, South Carolina, took up a motion to adjourn and reassemble in Baltimore on June 18, 1860.  Debate to this point had been heated and the fact that fever had broken out in the city made up the minds of many.  Delegates offered Philadelphia or New York as alternatives but the vote was 198 to 41 to adjourn and reassemble in Maryland. The convention broke up soon after. (By John Osborne)
Source Citation
Francis Vincent, Vincent's Semi-Annual United States Register.... 1st of January and 1st of July, 1860 (Philadelphia: Francis Vincent, 1860), 369.
How to Cite This Page: "In Charleston, South Carolina, the Democratic National Convention votes to adjourn and meet in Baltimore," House Divided: The Civil War Research Engine at Dickinson College, https://hd.housedivided.dickinson.edu/node/32065.