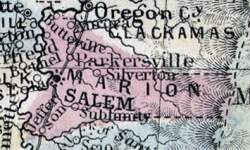 07/17/1860
Rumors of a Pacific Republic grew when the (Salem) Oregon Statesman published what the Democratic editor, Asahel Bush, called the plans for three American republics.  Two were to be in the East, one northern free labor, and the other northern slave holding, and the other was to be in the Pacific West, with the issue of slavery to be decided.  The Pacific Republic movement had been active in 1860 but died after the election in November.  (By John Osborne)
Source Citation
Charles H. Carey, History of Oregon (Portland, OR: The Pioneer Historical Publishing Company, 1922), 646
How to Cite This Page: "The Pacific republic movement spreads to Oregon with rumors printed in the Salem press ," House Divided: The Civil War Research Engine at Dickinson College, https://hd.housedivided.dickinson.edu/node/32555.