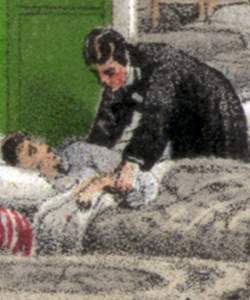 Dr. Andrew Nebinger was born on April 12, 1819 in Philadelphia, Pennsylvania. He attended the University of Pennsylvania and graduated from the school’s medical department in 1850. Nebinger headed his own medical practice during the years prior to the Civil War and received the appointment as the Cooper Shop Hospital’s surgeon in charge in October 1861. Throughout his four years as the head surgeon he tended to thousands of sick and wounded soldiers until the close of the war. His two younger brothers, George (1824-1868) and Robert (1828-1888) were also experienced physicians that served with Nebinger at the hospital. He retired from his medical practice in 1870 and focused on his responsibilities with Philadelphia’s Board of Education where he represented the Second Ward of the city for about twenty-five years, serving as the Controller for some time. The “Nebinger School” in Philadelphia was named after the three brothers. Nebinger never married and passed away in Philadelphia on December 12, 1886. (By Brenna McKelvey)
Life Span
12/12/1819 to 04/12/1886
How to Cite This Page: "Nebinger, Andrew," House Divided: The Civil War Research Engine at Dickinson College, https://hd.housedivided.dickinson.edu/node/33455.