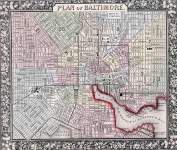 11/01/1860
On a cool Baltimore evening, a three-hundred strong "Wide-Awake" torch-lit parade took place at the same time as a large procession of Bell supporters, calling themselves "Minute Men."  A large group of Baltimore men attacked the Republicans as they approached the Front Street Theater, where their meeting was to be held.  Hundreds of hecklers got inside the hall and disrupted the speeches despite the significant efforts of the police.  (By John Osborne)
Source Citation
"The Baltimore Excitements," New York Times, November 2, 1860.
How to Cite This Page: "In Baltimore, pre-election political parades and meetings spawn violence," House Divided: The Civil War Research Engine at Dickinson College, https://hd.housedivided.dickinson.edu/node/34281.