A mass meeting of Philadelphia workingmen supports compromise and the Union 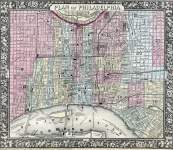 01/26/1861
The planned mass meeting of working men took place in Independence Square in the evening.  Speeches were made urging conciliation, the repeal of legislation offensive to the South, and the Crittenden proposals.  The meeting endorsed, however, a proposal to support the federal government in all "just and legal" enforcement of the law.  A delegation was then formed to visit the Congress and the White House in Washington and the state capitol in Harrisburg to lobby for these views. (By John Osborne)
Source Citation
Thomas Scharf and Thompson Wescott, History of Philadelphia 1609-1884, in three volumes (Philadelphia, PA: L.H. Everts & Co., 1884), I: 748-749.
How to Cite This Page: "A mass meeting of Philadelphia workingmen supports compromise and the Union," House Divided: The Civil War Research Engine at Dickinson College, https://hd.housedivided.dickinson.edu/node/35367.