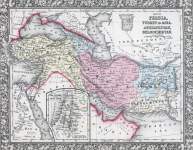 02/06/1862
The Prince of Wales, heir to the British throne, began a tour of Greece and the Middle East. Travelling as usual as "Baron Renfrew," his schedule included Egypt, Syria, Palestine, the Holy Land, and, during his return, Istanbul and Athens.  His journey took around five months and was said to be the first visit of a British royal family member to the area since the Crusades.  (By John Osborne)
Source Citation
Punch (London), Mr Punch's Victorian Era: In Illustrated Chronicle...(London: Bradbury, Agnew & Co., 1888), II: 47.
How to Cite This Page: "Britain's Prince of Wales embarks on a five month tour of the Middle East," House Divided: The Civil War Research Engine at Dickinson College, https://hd.housedivided.dickinson.edu/node/38788.