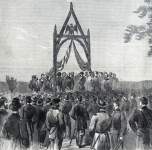 08/28/1863
At a open air ceremony in Virginia before a large audience and special guests, including Governor Andrew Curtin of Pennsylvania, the officers and men of the Pennsylvania Reserve, in General Samuel Crawford's division of the Army of the Potomac, presented General George Meade with an ornate sword, sash, and golden spurs.  The cost of the sword alone was rumored to have been between $1,500 and $2,200. Meade gave a long speech of gratitude both for the sword and the service of the Reserve in the recent campaign. (By John Osborne)
Source Citation
J.R. Sypher, History of the Pennsylvania Reserve Corps: A Complete Record of the Organization ; and of the Different Companies, Regiments and Brigades ; Containing Descriptions of Expeditions, Marches, Skirmishes, and Battles ; Together with Biographical Sketches of Officers and Personal Records of Each Man During His Term of Service ; Compiled from Official Reports and Other Documents (Lancaster, PA: Elias Barr, 1865), 490-493.
How to Cite This Page: "The troops of the Pennsylvania Reserve present General George Meade with a valuable sword in recognition of his leadership ," House Divided: The Civil War Research Engine at Dickinson College, https://hd.housedivided.dickinson.edu/node/41143.