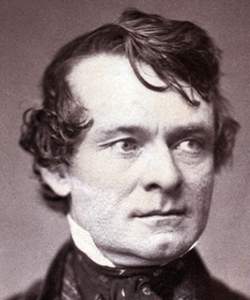 Andrew Gregg Curtin of Pennsylvania was the best known of the "War Governors." He was born in Bellefonte on April 22, 1817, the son of a Scots Irish immigrant iron manufacturer and a daughter of a prominent Pennsylvania political family. He studied law at Dickinson College under Judge John Reed and was admitted to the bar in 1839. A lifelong Presbyterian, he married Catherine Irvine Wilson in May 1844. While in private practice in Bellefonte, he became active in politics and campaigned for an array of Whig presidential candidates. By 1854, he was offered the Whig nomination for governor but declined in favor of his friend James Pollock. He did run in the pivotal election of 1860 as a Republican and a strong supporter of Lincoln who he had helped nominate at the national convention. During the Civil War his leadership at the meeting of the “Loyal War Governors of the North,” at Altoona in September 1862 was pivotal, and the Pennsylvania regiments he helped raise and supply were vital to the northern war effort. He was easily re-elected as governor in 1863. Following the war, he was briefly considered as running mate to Grant in 1868 and then appointed minister to Russia. He supported Horace Greeley as the Liberal Republican candidate for president in 1872 against Grant, however, and then moved in the direction of the Democratic Party. He was later elected for three terms to Congress as a Democrat in the 1880s. He retired in 1887 and lived in quiet retirement till his death on October 27, 1894. (By John Osborne)
Life Span
04/22/1817 to 10/27/1894
Dickinson Connection
Law class of 1837
How to Cite This Page: "Curtin, Andrew Gregg," House Divided: The Civil War Research Engine at Dickinson College, https://hd.housedivided.dickinson.edu/index.php/node/5520.