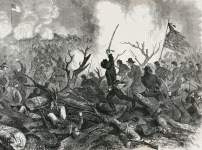 03/15/1864
Elements of the Army of the Tennessee under General Andrew Jackson Smith, with naval support, sortied against Shreveport up the Red River.  The formidable Fort De Russy stood in their way but a determined and swift evening Union attack by units under General Mower stormed the fort in just twenty minutes.  The Confederate garrison of around 300 was captured and the Union assault lost forty-eight men killed or wounded.  (By John Osborne)
Source Citation
Chronicles of the Great Rebellion Against the United States of America ... (Philadelphia, A. Winch, 1867), 70.
How to Cite This Page: "On the Red River, Union troops storm the formidable Fort De Russy in twenty minutes," House Divided: The Civil War Research Engine at Dickinson College, https://hd.housedivided.dickinson.edu/node/41772.