In Washington D.C., the House of Representatives passes the Thirteen Amendment outlawing slavery 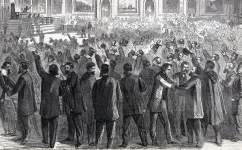 01/31/1865
The United States Senate had passed the proposal to amend the U.S. Constitution to ban slavery across the country in April 8, 1864. The House of Representatives had presented more of a problem but the measure narrowly won approval on this day, amid remarkable celebratory scenes, by a vote of 119 to 58. The Thirteenth Amendment was swiftly ratified and became law the following November.  (By John Osborne)
Source Citation
Chronicles of the Great Rebellion Against the United States of America (Philadelphia, PA: A. Winch, 1867), 94.
How to Cite This Page: "In Washington D.C., the House of Representatives passes the Thirteen Amendment outlawing slavery," House Divided: The Civil War Research Engine at Dickinson College, https://hd.housedivided.dickinson.edu/node/43683.