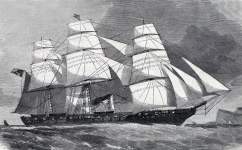 06/21/1865
Admiral Louis Goldsborough left the U.S. Navy's Brooklyn Yard in New York aboard the U.S.S. Colorado to take up the command of the navy's European Squadron.  Included in the fleet, operating in the Mediterranean, were the Colorado as flagship, and the U.S.S. Kearsarge, the U.S.S. Niagara, and the U.S.S. Sacramento, all veterans of the recent conflict at sea.  Goldsborough, incidentally, was fluent in Spanish and French.  (By John Osborne)
Source Citation
"The European Squadron," Harper's Weekly Magazine, July 15, 1865, p. 437.
How to Cite This Page: "The U.S. Navy's Admiral Louis Goldsborough sails to take command of the European Squadron," House Divided: The Civil War Research Engine at Dickinson College, https://hd.housedivided.dickinson.edu/node/44098.