In Nashville, Tennessee, a massive fire destroys a government warehouse and four million dollars in goods 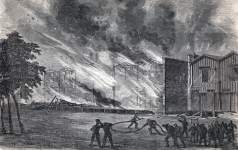 06/09/1865
At around 2 p.m., a fire broke out at the massive Taylor's Depot, a government storehouse on Summer Street in Nashville, Tennessee.  By five o'clock the building was completely burned out, along with a reported $4,000,000 worth of government stores.  The 500,000 pounds of wagon grease and the 100 barrels of tar there burned nicely, forcing firemen back from the blaze.  No injuries were reported, however.  (By John Osborne)
Source Citation
"Fire at Nashville,"  Frank Leslie's Illustrated Newspaper, July 8, 1865, p. 244.
How to Cite This Page: "In Nashville, Tennessee, a massive fire destroys a government warehouse and four million dollars in goods," House Divided: The Civil War Research Engine at Dickinson College, https://hd.housedivided.dickinson.edu/node/44130.