In Tennessee, gunfire erupts on the streets of Nashville and a prominent citizen is killed 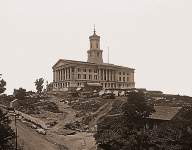 07/26/1865
Around six in the evening, two prominent Nashville citizens from two of the area's oldest families met on South College Street in the city.  One, H.B. Payne, drew a pistol and carried out his threat to kill Captain M.S. Allen, made months earlier when it became clear that Allen had seduced Payne's wife.  Allen was hit three times, the third time in the heart. A bystander was also injured. Payne was arrested for murder. (By John Osborne)
Source Citation
"Seduction and Shooting in Nashville, Chicago Tribune, July 31, 1865, p.4.
How to Cite This Page: "In Tennessee, gunfire erupts on the streets of Nashville and a prominent citizen is killed," House Divided: The Civil War Research Engine at Dickinson College, https://hd.housedivided.dickinson.edu/node/44308.