In Philadelphia, six hundred members of the Fenian Brotherhood meet in convention 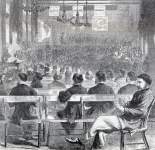 10/16/1865
A gathering of a reported six hundred delegates attended the opening of a convention of the Fenian Brotherhood at the Assembly Building on Chestnut Street in Philadelphia.  The Fenians were an Irish republican group dedicated to the overthrow of British control of their homeland, by any means necessary. Emotions were running high at the time, since in Ireland authorities were cracking down on a failed Fenian plot to raise an insurgency.  (By John Osborne)
Source Citation
"The Fenian Congress,"  Harper's Weekly Magazine, November 4, 1865, p. 694.
How to Cite This Page: "In Philadelphia, six hundred members of the Fenian Brotherhood meet in convention," House Divided: The Civil War Research Engine at Dickinson College, https://hd.housedivided.dickinson.edu/node/44530.