In New Orleans, a Republican effort to meet in Constitutional Convention results in riots and scores die. 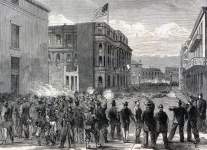 Louisiana Republicans had engineered the reconvening ot the Constitutional Convention of 1864 despite the declaration on the part of hostile Democratic Party officials in New Orleans and the legislature that it was an illegal gathering. President Johnson had forbade any federal intervention and despite an appeal for calm by New Orleans mayor John T. Monroe that morning, appalling violence broke out, with a siege of the site of the convention in the Mechanics' Hall, and a deadly attack on procession of African-Americans marching in support.  Murderous crowds, and the police, killed as many as forty-four blacks and four whites, many in cold blood.  The riot shocked the nation and helped the Republican Party to a landslide in the fall federal elections and then to more hostile measures against the South, through the Reconstruction Act.  (By John Osborne)

How to Cite This Page: "In New Orleans, a Republican effort to meet in Constitutional Convention results in riots and scores die.," House Divided: The Civil War Research Engine at Dickinson College, https://hd.housedivided.dickinson.edu/node/46022.