The Tenth National Saengerfest for German-American Choral Societies is held in Philadelphia. 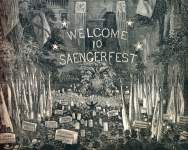 The Tenth National Saengerfest of the North East States of the Union was held in Philadelphia, Pennsylvania over six days. Ninety German-American choral groups, including dozens from New York and almost twenty from Philadelphia attended and competed for prizes.  The City Council held receptions, the Grand Concert was held at the Academy of Music, and massive picnics were held at Lemon Hill and, at the close of the celebration, and Engel and Wolf's Farm just outside the city.  (By John Osborne)

How to Cite This Page: "The Tenth National Saengerfest for German-American Choral Societies is held in Philadelphia.," House Divided: The Civil War Research Engine at Dickinson College, https://hd.housedivided.dickinson.edu/node/47479.