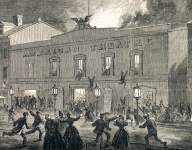 Just three months before, Robert Fox's New American Theater on Walnut Street in Philadelphia had been destroyed by fire during an evening performance.  Despite the blaze moving quickly, all those attending were able to scramble to safety through doors and windows.  Tragedy struck, though, when a section of the weakened front wall collapsed and killed ten men standing on Walnut Street around the still burning building.  The four year old theater was rebuilt remarkedly swiftly and reopened for a performance on this day.  (By John Osborne)

How to Cite This Page: "In Philadelphia, the New American Theater, destroyed by fire just three months before, re-opens.," House Divided: The Civil War Research Engine at Dickinson College, https://hd.housedivided.dickinson.edu/node/47483.