President Benito Juarez returns to Mexico City and the restoration of republican rule. 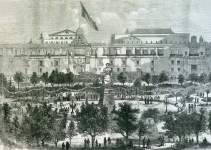 The president of the Mexican Republic, Benito Juarez, made his triumphant return to the capital of Mexico City on this day, amid great celebrations.  He had been elected in 1861 but on the French intervention, Juarez and his government had been forced to flee the city in 1863 and remain in exile and revolt for the following four years of the Empire of Maximilian I. On Maximilian's defeat and execution, Juarez oversaw the restoration of the Republic and sat as president until his death on July 18, 1872.  (By John Osborne)

How to Cite This Page: "President Benito Juarez returns to Mexico City and the restoration of republican rule.," House Divided: The Civil War Research Engine at Dickinson College, https://hd.housedivided.dickinson.edu/node/47651.