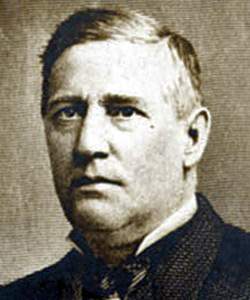 Alonzo Barton Cornell was the son of a famous father, a staunch Republican, and a one term governor of New York. He was born in Ithaca, New York, the eldest son of Ezra and Mary Cornell. He was educated at Ithaca Academy and watched and helped as his father built a fortune collaborating with Samuel Morse in setting up telegraphy in the United States. He assisted his father in founding the Western Union Telegraph Company, serving as a director and vice-president. He married Ellen Covert in 1852 and the couple had four children, all boys. Cornell became active in politics, first with a losing run for the lieutenant governorship of New York and then as chairman of the New York Republican Party between 1870 and 1878. President Grant named him as Surveyor of the Port of New York in 1876 but the new president, Rutherford B. Hayes removed him two years later when he refused the order for office holders to refrain from politics. Cornell got his reward for his loyalty to his state party when he was elected the thirtieth Governor of New York in November, 1879, defeating the Democratic incumbent Lucius Robinson. He served only one three year term, however, and returned to his business interests. He also wrote an affectionate biography of his philanthropist father. Alonzo Cornell died in 1904 and was buried with his mother and father in the chapel of Cornell University, the institution they had founded. (By John Osborne)
Life Span
01/22/1832 to 10/15/1904
How to Cite This Page: "Cornell, Alonzo Barton," House Divided: The Civil War Research Engine at Dickinson College, https://hd.housedivided.dickinson.edu/node/5481.