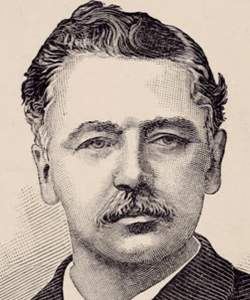 Edward Warren was a North Carolinian who had a distinguished and colorful international medical career and played a crucial role in the treatment of Confederate soldiers during the Civil War. Born the son of a wealthy country doctor in 1828, he was educated at the well-known Fairfax Institute in Alexandria, Virginia and at the University of Virginia. He completed his medical training at the Jefferson Medical College in Philadelphia and then spent eighteen months in Paris, then a leading innovative center of medical learning. He claimed to have discovered hypodermic medication while still in medical school. Warren returned to North Carolina to practice with his father in Edenton, North Carolina before teaching at the University of Maryland. In 1857, he married Elizabeth Cotton Johnstone, the daughter of a local Episcopal minister. A Whig in politics, he immediately took arms for the Confederacy in 1861. He was named medical inspector-general of the Army of Northern Virginia, surgeon-general of North Carolina, and authored an important surgical manual for Confederate field hospitals. After the war he returned to teaching and helped establish what was to become the Johns Hopkins Medical School. In 1873 he accepted a post in Egypt where he became surgeon in chief of the Egyptian army and was raised to the Turkish nobility. Two years later he moved to Paris and opened a successful practice there. He was honored in Spain and France, where he was made a Chevalier of the Legion of Honor. He died in Paris in September, 1893. (By John Osborne)
Life Span
01/22/1828 to 09/16/1893
How to Cite This Page: "Warren, Edward," House Divided: The Civil War Research Engine at Dickinson College, https://hd.housedivided.dickinson.edu/node/6803.