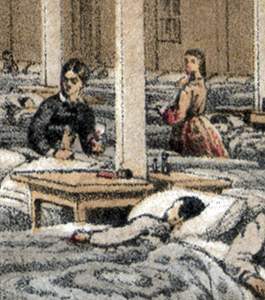 Anna Maria Ross was born in Philadelphia, Pennsylvania on March 25, 1813 as the daughter of Mary Root, a native of Chester County, Pennsylvania and William Ross, an emigrant from Derry, Ireland. She served as the Lady Principle of the Cooper Shop Hospital from its opening on October 29, 1861 and tended to the sick and wounded soldiers passing through. In the spring of 1863, she helped plan a fair that would contribute to raising funds for a Soldiers Home for Civil War veterans and traveled throughout Pennsylvania and New Jersey in order to obtain assistance and support of the project. Ross helped collect about two thousand dollars through her individual fundraising efforts. Anna M. Ross passed away on December 22, 1863, reportedly from overwork and was buried in Monument Cemetery in Pennsylvania. Her tomb stone is said to have the inscription: “When the Civil War disclosed its horrors, she dedicated her life to the sick and wounded soldiers of her country, and died a martyr to Humanity and Patriotism.” The Grand Army of the Republic named Post #94 in Philadelphia as a posthumous honor. (By Brenna McKelvey)
Life Span
03/25/1813 to 12/22/1863
How to Cite This Page: "Ross, Anna M.," House Divided: The Civil War Research Engine at Dickinson College, http://hd.housedivided.dickinson.edu/node/33456.