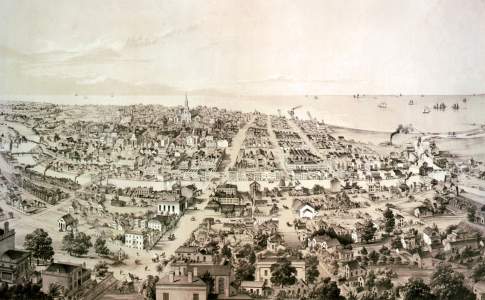 MILWAUKEE, the chief city of Wisconsin, and next to Chicago, the largest on Lake Michigan, is situated in Milwaukee co., finely located for commerce, on both sides of Milwaukee river, at its entrance into the lake... Steamboats and other vessels, navigating Lake Michigan, touch here, on their way to and from Detroit and points on Lake Erie, and the St. Lawrence, Erie, and Welland canals. The surrounding region is rich, and rapidly increasing In an industrious and enterprising population, of which Milwaukee is the nucleus and the centre of trade. (Fanning's, 1853)
How to Cite This Page: "Milwaukee, WI," House Divided: The Civil War Research Engine at Dickinson College, https://hd.housedivided.dickinson.edu/index.php/node/17443.