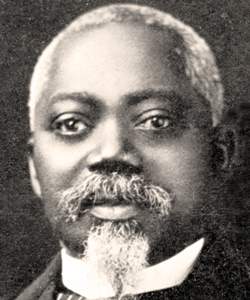 William Harvey Carney, a member of the 54th Massachusetts, was awarded a Medal of Honor for his actions at Fort Wagner. Born on February 29, 1840 in Norfolk, Virginia, Carney expressed an early interest in religion and in 1854 attended a school run by a local minister, intending to train for the clergy. By 1861 the Carney family had purchased their freedom and was living in New Bedford, Massachusetts. In 1863, Carney joined the Morgan Guards, which became Company C of the 54th Massachusetts, one of the first black regiments. Sergeant Carney distinguished himself in his second battle, when he kept the regiment’s colors from falling to the ground after Colonel Robert Gould Shaw was shot during the assault on Fort Wagner on July 18, 1863 at Morris Island, South Carolina. After the war Carney returned to Massachusetts where he married Susannah Williams in 1865 and had one daughter. Carney became the state's fourth African-American postman in 1870, a position he held for 31 years. In 1900 Carney received a Congressional Medal of Honor for his act of bravery at Fort Wagner, the earliest African-American action to be recognized with a Medal of Honor. Following Carney’s death on December 8, 1908, the Massachusetts state house flew its flag at half-mast. There are few primary sources written by Carney himself. Carney is mentioned in histories of the 54th, but there is no adult biography dedicated to Carney alone. (By Rebecca Solnit)
Life Span
02/29/1840 to 12/08/1908
How to Cite This Page: "Carney, William Harvey," House Divided: The Civil War Research Engine at Dickinson College, https://hd.housedivided.dickinson.edu/index.php/node/32470.