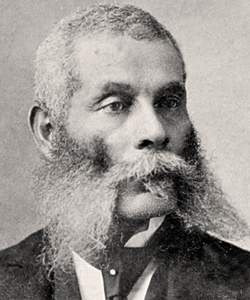 Alexander Kelly was born in Saltsburg, Pennsylvania and was awarded the Medal of Honor during his service with the United States Colored Troops in the Civil War. Kelly grew up in western Pennsylvania and became a coal miner. In August 1863, Kelly enlisted in Company F of the 6th USCT Regiment at Allegheny City, Pennsylvania. He received the Medal of Honor on April 16, 1865, for his actions at Chaffin's Farm, Virginia on September 29, 1864. The citation noted that Kelly, then serving as the company's First Sergeant, “gallantly seized the colors, which had fallen near the enemy's lines of abatis, raised them and rallied the men at a time of confusion and in a place of the greatest danger.” He had a brother named Elias who also served as a corporal in the 45th USCT, Co. D. but who died in uniform in Edinburg, Texas on July 25, 1865. Another, older brother, David Kelly, emigrated to Monrovia, Liberia in 1853 and returned to Pittsburgh and served as a minister. After the war, Alexander married Victoria on July 30, 1866 and lived near Pittsburgh, Pennsylvania, working a variety of jobs, including as nightwatchman for the Pittsburgh Police Department stables. He died in 1907 and was buried at St. Peter's Cemetery in Pittsburgh. (By Don Sailer)
Life Span
04/07/1840 to 06/19/1907
How to Cite This Page: "Kelly, Alexander," House Divided: The Civil War Research Engine at Dickinson College, https://hd.housedivided.dickinson.edu/index.php/node/32472.