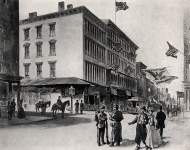 06/16/1861
Philadelphian Thomas Young spoke in front of the Methodist Church on Green Street and questioned, according to reports, the Government's right to hang Southern privateers for piracy. He also justified the recent shooting of Colonel Ellsworth.  His enraged listeners chased him into a nearby house, where he was arrested.  Mayor Alexander Henry, though, determined Young was within his First Amendment rights and released him. (By John Osborne)
Source Citation
Thomas Scharf and Thompson Wescott, History of Philadelphia 1609-1884, in three volumes (Philadelphia, PA: L.H. Everts & Co., 1884), 770.
How to Cite This Page: "Philadelphia man arrested on a charge of inciting riot then freed on First Amendment grounds," House Divided: The Civil War Research Engine at Dickinson College, https://hd.housedivided.dickinson.edu/index.php/node/37846.