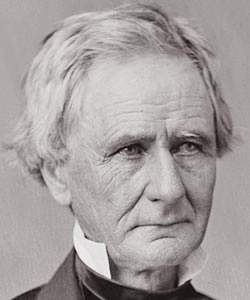 Simon Cameron served multiple terms in Senate and held the position of Secretary of War under Lincoln. He was born in 1799 in Lancaster County, Pennsylvania. His father, Charles Cameron, struggled financially and could not afford to educate him. Nonetheless, in his adolescence he became a printer’s apprentice. Later, Cameron took jobs as an editor and invested in his first paper in 1822. That same year, he met and married his wife, Margaretta Brua with whom he fathered ten children. Cameron was a tall, scrawny man with a narrow face and furrowed brow. In 1824 he entered public service and by 1845 became a U.S. Senator, defeating fellow Democrat, James Buchanan, with support from Whigs and anti-Catholics. In response, the regular Democrats unseated Cameron in the subsequent election. In 1857, Cameron won reelection as a Republican. In 1860 he ran for president, but ended up giving his support to Lincoln. Although wary of Cameron’s reputation for political corruption, Lincoln appointed him Secretary of War in 1861. In 1862 the House of Representatives censured Cameron for giving unsupervised contracts to unqualified firms. The House claimed that Cameron practiced patronage and rarely recorded financial records accurately. In 1867 he returned to the Senate, but his censure remained in effect until 1871. Cameron served until 1877 at which point he stepped down so that his son, James Cameron, could take his seat. He died in 1889 at his home in Harrisburg. (By David Park)