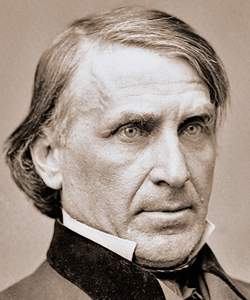 Elihu Washburne was one of four brothers from Maine who helped organize the Republican Party in four different states. The third son born to store owner Israel Washburn and his wife Martha in Livermore, Maine, Elihu alone among the four famous brothers used the older spelling of the family name. He worked to save money to attend Harvard Law School and passed the bar in 1839. He went west soon after and began a practice in Galena, Illinois where he entered politics as a Whig in 1844. The next year he married Adèle Gratiot, with whom he had seven children. In 1852, Washburne won a seat in Congress and served until 1869. He sat at the same time as his brother Israel Washburn, who represented a district in Maine. Strongly built, serious, and uncompromisingly honest, his strict Presbyterian morality offended some but as chair of the Appropriations Committee he earned the grudging nickname "Watchdog of the Treasury." He was a strong ally of Abraham Lincoln, both in Illinois and Washington and also the champion of his most talented Galena constituent, Ulysses Grant. His leadership of the Radical Republicans in Congress ended when Grant named him as his Secretary of State in March 1869. Washburne preferred more direct foreign service and was named Minister to France only five days later. He served with influence and distinction there for eight years. This was his last public position and he retired to Chicago where he died in October 1887. (By David Park)