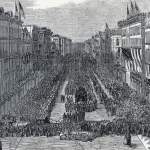 05/01/1865
President Lincoln's remains arrived in Chicago, Illinois at eleven in the morning to a remarkable civic demonstration of grief. The coffin was taken from the train at a special station built at Park Place and taken down Michigan Avenue in a massive parade of soldiers, police, and dignitaries from the city and the Congress, together with civic organizations. Total numbers for the parade were estimated at around 37,000. The coffin lay in state at the Court House until the following afternoon.  (By John Osborne)
Source Citation
John Carroll Power, Abraham Lincoln: His Life, Public Services, Death and Great Funeral Cortege ... (Chicago, IL: H.W. Rokker, 1889), 187-195.
How to Cite This Page: "Reaching his home state, President Lincoln's remains arrive in Chicago to a remarkable reception," House Divided: The Civil War Research Engine at Dickinson College, https://hd.housedivided.dickinson.edu/node/43777.