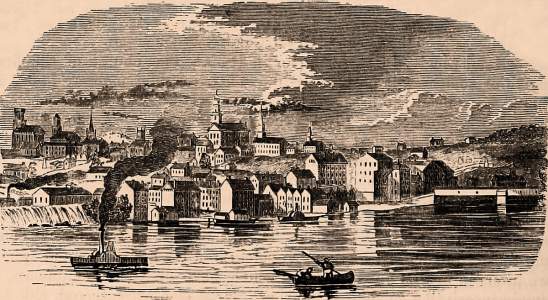 AUGUSTA, the capital of the state of Maine, and seat of justice of Kennebec county, is situated on both sides of Kennebec river, at the head of sloop navigation, 42 miles from the ocean, 163 northeast of Boston, and 595 miles from Washington. In 1831 the seat of government was removed from Portland to this place. The statehouse is situated a little south of the town, on the west side of the river, and is constructed of granite, after the plan of the Massachusetts statehouse, in Boston. Length of the central part, 84 feet; depth, 56 feet, with a wing on each side 34 by 54 feet. It is entered by a Doric portico of eight granite columns, 21 feet high. The central part of the building is surmounted by a handsome cupola and dome, and the whole is embosomed in a spacious park of ornamental trees. An elegant and costly stone bridge of two arches, each of 180 feet span, connects the two parts of the village. Among other public structures are the United States arsenal, which is on the east side of the river, the state lunatic asylum, and the Augusta high school. The growth of the place has been rapid since it became the capital of the state. Pop. in 1810. 1.805; in 1820, 2,475; in 1830, 3,800; in 1840, 5,314; in 1850, 8,255. (Fannings, 1853)

How to Cite This Page: "Augusta, ME," House Divided: The Civil War Research Engine at Dickinson College, https://hd.housedivided.dickinson.edu/node/20423.