The new 730-ton side wheel gunboat U.S.S. Miami is launched at the Philadelphia Navy Yard 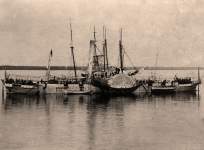 11/16/1861
Miss Ann Ingersoll christened and launched the new 224 foot, 730 ton, side wheel gunboat U.S.S. Miami in Philadelphia.  The wooden-hulled Miami had been built at the Philadelphia Navy Yard and was later commissioned on January 29, 1862 with Lieutenant A. D. Harrell in command.  She saw action in the New Orleans and Vicksburg Campaigns, then off North Carolina.  She was decommissioned and sold into commercial service at the end of the war. (By John Osborne)
Source Citation
Arthur Wyllie, The Union Navy (Raleigh, NC: Arthur Wyllie, 2007), 358.
How to Cite This Page: "The new 730-ton side wheel gunboat U.S.S. Miami is launched at the Philadelphia Navy Yard," House Divided: The Civil War Research Engine at Dickinson College, https://hd.housedivided.dickinson.edu/node/38256.