Abraham Lincoln returns to Springfield, Illinois where his remains lay in state in the State House 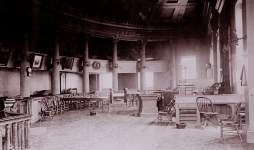 05/03/1865
President Lincoln's funeral train, on the twelfth day of its journey, arrived at its destination just one hour behind schedule. Amid huge crowds, the coffin was taken to the State House where it lay in state in Representatives' Hall. Arriving in Springfield with the body were three men who had left for Washington from there with the newly elected President Lincoln in early 1861, David Hunter, David Davis, and Ward Lamon.  (By John Osborne)
Source Citation
John Carroll Power, Abraham Lincoln: His Life, Public Services, Death and Great Funeral Cortege ... (Chicago, IL: H.W. Rokker, 1889), 203-205.
How to Cite This Page: "Abraham Lincoln returns to Springfield, Illinois where his remains lay in state in the State House," House Divided: The Civil War Research Engine at Dickinson College, https://hd.housedivided.dickinson.edu/node/43779.