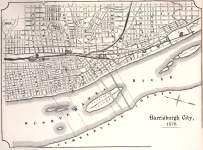 Republicans triumphed in the state and federal elections on this day.  Famous Union General John White Geary was elected as governor with a majority of just over seventeen thousand in a total vote of almost 600,000 ballots cast.  His party also retained control of the Legislature, with a majority of twenty-one to twelve in the upper house and of sixty-two to eight in the lower.  Seats for the Fortieth Congress were also decided, with Republicans taking eighteen of the twenty-four seats, an increase of three seats over the Democrats.  (By John Osborne)

"Pennsylvania," The American Cyclopedia and Register of Important Events of the Year 1866 (New York: D. Appleton and Company, 1873), 615.