At the port of Veracruz, French forces complete their evacuation from Mexico. 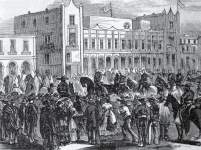 Following the orders of French Emperor Napoleon III, Marshal Francois Bazaine had gathered in December 1866 all French troops supporting the rule of Emperor Maximillian in Mexico around Mexico City in preparation for their evacuation.  After a delay, reportedly to help the stricken imperial regime, the much admired French commander finally had departed the capital for the port of Vera Cruz on February 5, 1867.  By this day, all French forces had left and Maximilian's government soon fell to the troops of Benito Juarez.  (By John Osborne)

How to Cite This Page: "At the port of Veracruz, French forces complete their evacuation from Mexico.," House Divided: The Civil War Research Engine at Dickinson College, https://hd.housedivided.dickinson.edu/node/46593.